Seagull Surfing! Seagull Hitches a Ride on Another Seagull 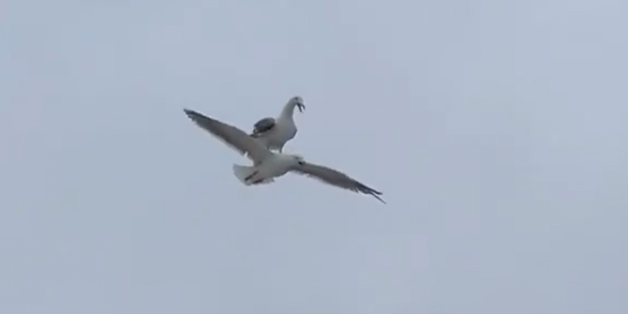 This seagull has it all sorted! Amazing footage of a seagull catching a ride on another seagull mid-flight has gone viral after astonishing viewers.

Twitter user Buitengebieden shared the video which currently has almost 3 million views and over 100K likes.

The nine-second clip is set on a grey cloudy day with strong winds and two seagulls are in frame.

On a closer look, you can see one seagull flying with the other one standing on top of his friend taking a ride as it fights against the wind.

As the birds lift up further, the bottom gull nips at the rider causing it to jump off and fly off on its own.

The scene looks like it's set up, reminiscent of the iconic scene in the Titanic or the magic carpet ride in Aladdin.

Of course, Twitter users replied to the video with the best reactions below:

“I’m the King of the world!” pic.twitter.com/fOrRpfnQVy

What about this one 🤷🏻‍♂️ pic.twitter.com/m9hb1mZNWZ

I unmuted and was disappointed it wasn't this 😅https://t.co/MmopMjzQrv

The moment has been so iconic that even a T-Shirt has been made.